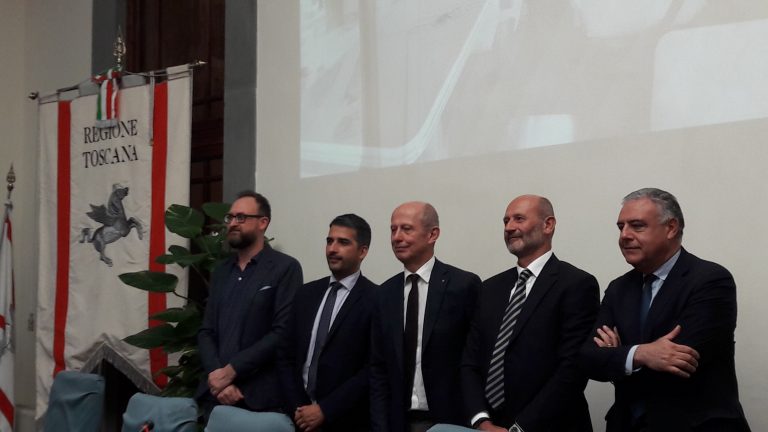 The Tuscany Region and the Trigano Group sign a memorandum of understanding to guarantee a strengthening of the group’s presence and its further rooting in Tuscany. This is the purpose of the MoU signed at Palazzo Strozzi Sacrati between the Tuscany Region, the Municipalities of Barberino Val d’Elsa, San Gimignano and Poggibonsi and the Trigano Group, a leader in the market of plen air and motorhomes active in Tuscany for more than thirty years. The document was signed by the regional councillor for productive activities Stefano Ciuoffo, the mayors of the three municipalities and by the CEO of the Trigano Group.

“The Trigano Group – said the regional concillor for the productive activities – has established itself throughout Europe and is a leading company in Italy in its sector. In recent years it has shown a dynamic of great expansion with a turnover that at the end of 2017 reached 400 million euros and a workforce of 850 units. In the next few years the Group’s intention is to expand the production facilities of Poggibonsi, San Gimignano and Barberino Val d’Elsa and to forge even stronger relationships with public bodies, research bodies and Tuscan universities”.

Tuscany, added the councillor, “is also strongly interested in promoting the dissemination of innovative processes in the R&D field and to give support to technology transfer between academia and business to increase the competitiveness of its production system. In order to attract Italian and foreign investors we have created Invest in Tuscany, an internal structure that assists investors in all phases of the process (facilitation and accompaniment, definition and implementation of the investment project) also activating forms of partnership with research bodies and local companies”.

With the signing of the memorandum, the Region will take action to accompany and facilitate the expansion and strengthening of the Group’s existing plants and the possible creation of new ones. It will also coordinate and speed up all the necessary phases for the adoption, by the municipalities involved, of any urban variants and will make arrangements with the competent bodies to facilitate the extensions themselves; it will promote integrated interventions with respect to short and long-term training activities. Always with the support of Invest in Tuscany, it will organize other partnering days between the Group and the system of companies working in Tuscany in order to create possible collaborations and synergies between them. The cooperation can also be extended to the promotion of actions in the fields of sustainable mobility, tourism and good practices relating to the handling of products and the disposal of waste coming from the production cycles.