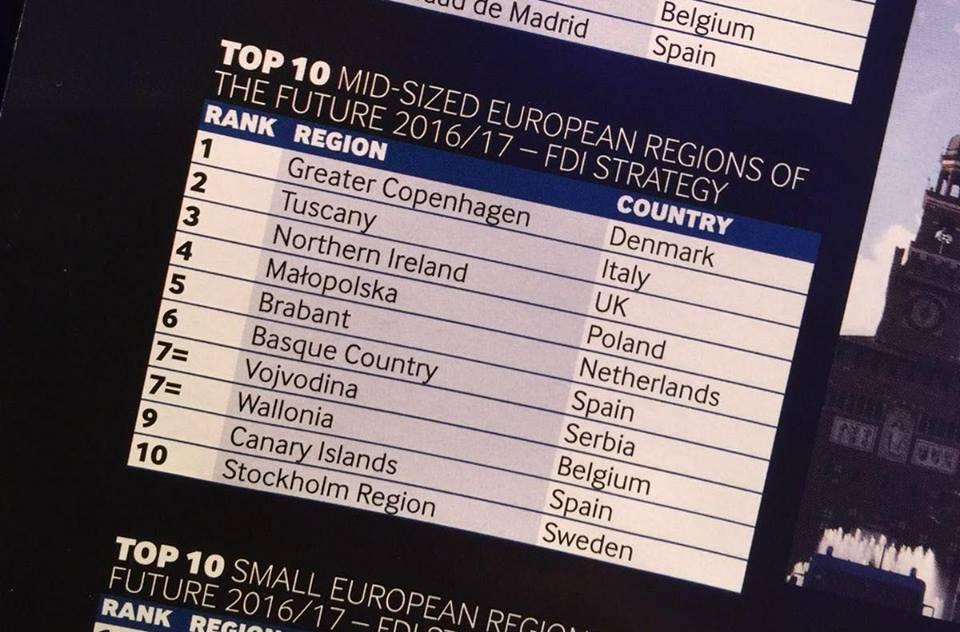 Tuscany has been ranked second among Mid-sized European Regions of the future 2016/17 – FDI Strategy” according to ‘European Cities and Regions of the Future Rankings’ prepared independently every two years by ‘FDI Magazine – Financial Times,’ which compares data and information on 481 locations for European cities and regions.

Second, after Greater Copenhagen, between regions with 1.5 and 4 million inhabitants where also Greater Stockholm Region, Northern Ireland, Wallonia, Basque County and the Brabant were on the Top 10 list.

The judges were particularly impressed by the region’s digital offering, which includes a new website, and updated Guides on Doing Business in Tuscany and costs of setting up in our region.

The awards ceremony will be held on March 15 in Cannes, France, during the exhibition ‘MIPIM’ dedicated to real estate investments, where ‘Invest in Tuscany’ will be present.

‘Invest in Tuscany’ who is behind the development of FDI strategy, is a network coordinated by the Tuscan Region whose objective is to encourage, support and develop the entry of foreign capital into the Region. Working in partnership with Municipalities, Provinces, Chambers of Commerce, universities, research centres and national institutions such as Invitalia and ICE, ‘Invest in Tuscany’ is a point of contact for companies and corporations interested in investing in Tuscany.