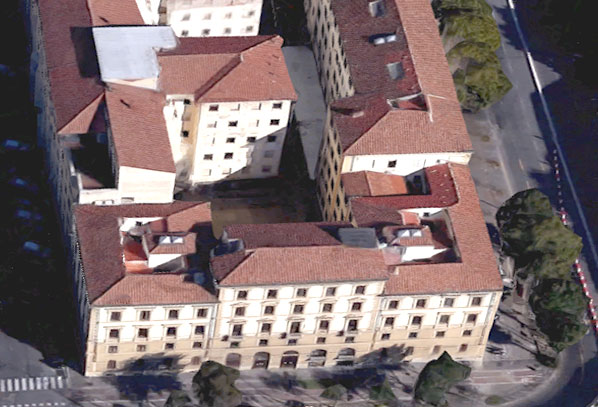 Dutch hospitality group The Student Hotel has started a housing revolution, and they’ve chosen Florence as the first city in their expansion across Europe. Launched in Amsterdam by Scottish entrepreneur Charlie MacGregor, The Student Hotel has purchased the giant Palazzo del Sonno near the Fortezza da Basso, where it will open its first Italian structure in September 2017. The hybrid hotel and housing complex will comprise 390 rooms and create around 300 jobs during construction and upon opening for business. The investment in the Florence project is just over 40 million euro, and the budget for the entire European expansion totals 600 million euro.The Student Hotel’s innovative business model combines boutique luxury and design with the social elements of the traditional student housing experience. Structures are primarily residential, offering short term stays from three weeks and longer-term options for a semester or academic year. What differentiates The Student Hotel from a hostel or conventional dormitory, however, is the focus on networking and community: the aim is to connect international students with young professionals, traveling entrepreneurs and local organizations. To that end, the Florence property will feature numerous public areas and amenities, including a co-working office, conference rooms, a cafe and restaurant, a library, a rooftop swimming pool and a 180-seat auditorium. The Student Hotel’s team hopes that the hotel courtyard will become like a public piazza. The interior aesthetic will have a modern and trendy feel, but the building will maintain its 19th century facade.Though The Student Hotel has developed partnerships with numerous academic institutions, MacGregor insists that no single university or program will monopolize the rooms: ‘We work directly with students and want to ensure that we have a diverse group in the space.’ New energy is fundamental to the business model: ‘We generally limit stays to one year because when students first arrive, they are all in the same situation, looking to meet new people and explore the city.’ MacGregor went on to explain that students who stay in Florence for more than one year will have a chance to ‘find their footing’ in a safe and social environment, helping ensure that they will thrive after they’ve moved on to independent housing.
Monthly room rates will start at around 600 euro, a comprehensive price that includes furnishings, a shared kitchen, WiFi, flat-screen television and a bicycle to use around town. Security staff will be present 24 hours a day, 7 days a week. Students will also have access to an optional meal plan (at an additional cost) and can take part in a variety of events organized on-site.Short stay options aren’t aimed at traditional vacationers, but young professionals, graduates and globetrotters who come to Florence for internships, freelancing or fixed-term positions. However, The Student Hotel Firenze will also set aside some rooms for short-term stays starting at just one night, designed primarily for visiting parents and family members.In preparation for the September 2017 opening, The Student Hotel team plans to host a variety of events to spread the word and bring the international community together.